Turkish daily Sabah on Monday published photos of 15 men who the newspaper said spied on behalf of Israeli intelligence agency Mossad and were arrested by authorities earlier this month.

The photos appear to be photos of the men taken by Turkish authorities and are accompanied by initials claiming to represent their names. No other details were reported by the newspaper.

According to a report from Sabah last week, the arrests took place on October 7, following a year-long National Intelligence Organization (MIT) operation involving some 200 Turkish intelligence operatives who tracked down the suspected spies.

The suspects, who are believed to be of Arab origin, operated in groups of three, according to the report. Some had met Mossad agents in Croatia and Switzerland, where information was exchanged. They had also received orders in the Romanian capital of Bucharest and in Nairobi in Kenya. The five groups had operated in different parts of the country, Sabah reported.

The chairman of the powerful Knesset Foreign Affairs and Defense Committee said on Saturday that none of the 15 was a Mossad agent. MP Ram Ben-Barak, former deputy director of Mossad, also suggested that the Turkish government was eager to show off its intelligence “achievements”, leading to the occasional publication of false information. “None of the published names have been [of] Israeli spies and therefore that should be put in proportion, â€he told Channel 12.

By registering, you accept the conditions

Sabah, close to Turkish President Recep Tayyip Erdogan, interviewed one of the detainees on Friday, whom he identified only by his initials, the MAS.

There was no official confirmation from Turkey on the arrests and it was not clear how the newspaper questioned the man if he had been arrested.

â€œI met a Mossad official face to face. He taught me how to encrypt files on the laptop, â€MAS told Sabah.

Protesters wave Palestinian flags outside the Israeli consulate in Istanbul on May 15, 2018 (OZAN KOSE / AFP)

The man, who has a company that provides counseling services to students coming from overseas to Istanbul, told the newspaper that he was assigned to monitor Palestinians in Turkey. He said he was first approached by a man claiming to represent an Arab based in Germany who wanted to study in Turkey.

The man was initially awarded hundreds of euros for providing information on how Palestinian students entered Turkish universities and the type of support they received from Turkish authorities.

He also later claimed to have provided the client with details of a Palestinian organization working in Turkey.

He said he had received some $ 10,000 in exchange for providing information over three years; some of the money was sent via Western Union and some was given to him at a market in Istanbul when he showed his ID and receipt.

The main targets of the espionage operation were the Palestinians in Turkey and the facilities that housed them, Sabah said.

According to the newspaper, MIT also found out how agents were paid, including cryptocurrency payments and money transfers from jewelry and exchange stores.

A report last year claimed that the Palestinian terror group Hamas was secretly operating a facility in Turkey where it carried out cyber attacks and counterintelligence operations against Israel.

The headquarters, which is separate from official Hamas offices in the city, was installed without the knowledge of Turkish authorities, according to the report. 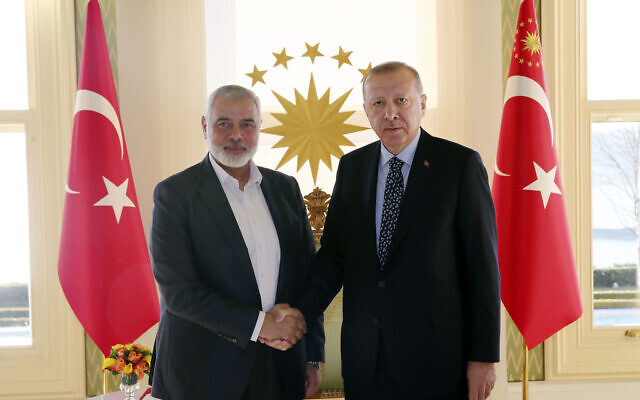 British daily The Telegraph reported in 2020 that Turkey is granting citizenship to a dozen high-ranking Hamas operatives involved in coordinating terrorist attacks. The report was then confirmed by the charge d’affaires at the Israeli embassy in Ankara.

Turkey views Hamas as a legitimate political movement. The country has long enjoyed warm ties with Hamas, which have intensified as relations with Israel have cooled over the past decade. Israel complained to Ankara about its ties to Hamas, but to no avail, according to the report.

In August 2020, Erdogan met with a Hamas delegation that included political bureau chief Ismail Haniyeh and terrorist group number 2 Saleh al-Arouri – a senior military commander who has a bounty of US $ 5 million on his head. . The meeting was harshly condemned by the US State Department at the time, but the Turkish Foreign Ministry dismissed the criticism, accusing Washington of “serving the interests of Israel.”

Hamas and Erdogan’s AKP party are politically linked. Both have strong ideological ties to the Egyptian Muslim Brotherhood movement.

Learn Hebrew in a fun and unique way

You get news from Israel … but do you TO HAVE this? Here is your chance to understand not only the big picture that we cover on these pages, but also the critical and juicy details of life in Israel.

In Streetwise Hebrew for the Times of Israel community, each month, we will learn several familiar Hebrew phrases around a common theme. These are small audio Hebrew lessons that we think you will really enjoy.

Are you serious. We appreciate this!

We are really glad you read X Times of Israel Articles in the past month.

That’s why we come to work every day – to provide discerning readers like you with must-see coverage of Israel and the Jewish world.

So now we have a request. Unlike other media, we have not set up a paywall. But since the journalism we do is expensive, we invite readers for whom The Times of Israel has become important to help support our work by joining The Times of Israel community.

For as little as $ 6 per month, you can help support our quality journalism while benefiting from The Times of Israel WITHOUT ADVERTISING, as well as access to exclusive content reserved for members of the Times of Israel community.