For their part, government officials in Damascus have insisted on numerous conditions for reconciliation with the Turkish occupying state, the most important of which is the withdrawal of the Turkish occupying forces from occupied Syrian territory and the cessation of support for the groups of mercenaries.

The old “Adana Accord” signed between the government of Damascus and Ankara in 1998 is currently being revised and amended to extend Ankara’s domination and occupation of Syrian territory along the border to a depth of 30 km .

The north and east of Syria have rejected any reconciliation with the Turkish occupying state.

Their situation will not be good if there is convergence.

Walid Joly, political scientist and head of public relations at the Euphrates Research Center, points out that the populations of the occupied areas have been affected by much of the war in Syria, in particular with the regime and the internal fighting, due to of the opposition’s dependence on its decisions on Turkey.

According to Joly, the populations of these areas see the status quo as a rapprochement between the Turkish and Syrian regimes whose fate will be fatal. They do not accept in any case to live under the authority of the regime, as before. “The opposition and the armed factions control them. This does not mean that all the terrorists, who live in these areas, have been controlled following the fierce fighting that took place in Ghouta, Homs and Idlib and have been displaced from place to place, so their situation will not be good if there is convergence.”

Turkey can sell them in any bazaar

German Kurdish Forum President Yunus Bahram said popular protests in “areas directly under the control of terrorist organizations and Turkish support, calculated that this day was only a matter of time and s is turned into ashes and blocks of fire”. ”

Bahram was likely that Turkey could sell these organizations in any bazaar to the Russians and the regime for its interests invoking its national security, as it had sold them to the regime in Ghouta, Homs and Aleppo.

The pressure generates an explosion

Bahram sees the uprisings in occupied Syrian areas as “explosive pressure”, saying: “These people lack a political and military decision backed by the evil of the scourge of the occupiers, and therein lies the question of whether the SDF can answer the call of our people there, as answered to the people of Deir ez-Zor and Raqqa.”

They agree that there will be no Kurdish project.

Joly pointed out that during the years of crisis, the Turkish regime dealt painful blows to the Syrian regime and Iranian interests in the region. He explained: “The point on which they agree is that there is no Kurdish project affecting the Constitution of Central Syria. As long as the Kurds lead this project, the three parties will agree to destroy it. .”

“In the 1920s, when Turkey began to fix its national borders, its discussions and agreements with its neighbors for joint border protection in order to suppress any Kurdish disobedience developing within the borders of any State (Syria Iraq Iran Turkey),” Joly said.

Russia’s main objective is the return of central Syria

Joly said that Russia is a sponsor of this issue and its main objective is the return of centralization in Syria to protect Russian interests in the region. He said: “It is not in Russia’s interest to have a decentralized regime in Syria. This may affect Syrian international relations in the future, especially with America. Russia is vigilant on this axis, so the interests that met in Tehran were on this basis.

Turkey’s founding regime is not a true national system

Joly indicates who follows the situation in Turkey will inevitably expect Turkish-Syrian relations to return to politics, which is a strategic policy of Turkey, always taking into account the Kurdish people, the founding system of Turkey is not a true national system, but a system based on a small Turkish elite. They reject other nationalities and cultures and do not see them as existing, especially the Kurds, and open them up to Turkish administration or the making of a new constitution for Turkey.

Joly ruled out any type of compromise in the Turkish-Syrian convergence, saying: “Russia and America control the airspace in the region, what they can offer Turkey to allow the airspace for drones.

Joly does not rule out that the Turkish regime is pulling the rug out from under the feet of the “opposition” in the Bab and Idlib regions and withdrawing its forces from these areas.

According to Joly, Turkey cannot concede its objectives “may give promises of withdrawal from certain Syrian areas, but Turkey’s plans in this area of ​​demographic change projects and milestones in the region prove that the fate of these areas will be similar to Sanjak of Alexandretta then a referendum and its annexation to geopolitics.

“It will become a major problem, it is not possible for the Syrian regime to deter Turkey, it may become a problem between Turkey and Russia, there are files and papers of Turkey in the hands of Russia through which the subjection of Turkey,” Joly said. . 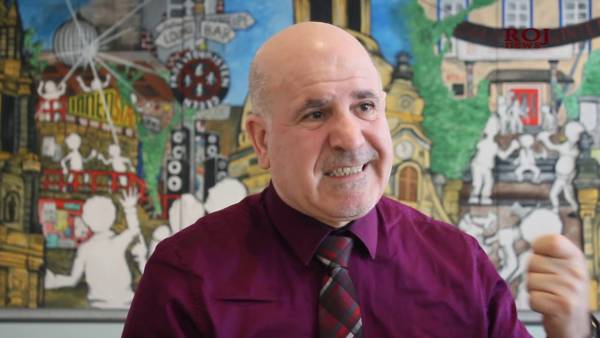 As for what the situation would be if a new convention took place, Joly explains: “The pro-Turkish occupation factions benefiting from the status quo have been naturalized in Turkey, considered Turkish citizens and any political decision that will not affect them even if they negotiate with the Syrian regime and reach a formula, there will therefore be ruin, destruction, killing, hunger and new migration. The inhabitants of these areas cannot live with the agreed points.

Pressure must be suspended to stop Turkish drones

He noted: “ISIS/Daesh sleeper cells are active in this area, it is not in anyone’s interest, so pressure must be exerted to stop the Turkish drones.”

Yunus Bahram said northwestern Syria suffered from two occupations, one by the Turkish regime as a neighboring state and a desire for expansion, and later hoped to establish the new Ottoman, which changed currency, language and many features of life. there, adding: “Others by the Turkish-backed Islamic terrorist organizations, they confiscated the rest of the lives of the local people disguised under the cloak of Syrian national opposition and religious identity, and in fact they are just scum, they were trained to fight alongside Erdogan in Syria, Kurdistan, Libya, Azerbaijan and Turkey.”

As for a possible convergence between the occupation and Damascus, Yunus Bahram says: “It was only a desperate attempt by both parties to strike at the democratic experience of Rojava in the service of the dictatorship of their systems and the expansionist aspirations of the expense of the peoples of the region.”

Bahram asked; Will these two dictators manage to normalize their will on the Syrian scene, especially in areas they do not control? He said: “I don’t think there are more players in this geography playing a role and their weight in weighing the political and military balance there. Besides the inconsistency of conditions between them, the regime wants Turkey’s complete exit from Syria and Turkey intends to occupy the most oil and gas rich areas of Syria to put its grip on the Syrian economy, and here it seems at first sight that the desires between them are incoherent”.

Turkey will give up a lot of things in exchange for the Kurds getting nothing.

Bahram points out that Turkey can do anything and concede a lot in exchange for the Kurds getting nothing, in front of the regime in Damascus he wants to buy time and exploit Turkish threats to sweep the regions of Rojava to win more Kurdish concessions in exchange for protecting Syria’s external borders from the Turkish offensive. “

Their fate is doomed.

that Turkey would sell them as it sold them in Ghouta, Homs and Aleppo under the name of settlement process and after liquidation, noting: “Finally, this makes the sane think about how Erdogan could buy mercenaries Qatari Arabs, to fight them and occupy the Arab towns and then annex them to Turkey.”