ISTANBUL, Turkey — At least 34 people were killed and dozens injured on Saturday in two separate road accidents, each in locations where collisions had taken place shortly before, local media reported.

A first crash involving a bus and an ambulance left 15 dead and 31 injured on a highway in Gaziantep province, local officials said, revising an earlier toll of 16.

Governor Davut Gul said earlier the accident involved “a bus, an emergency team and an ambulance” on the road between the provincial capital Gaziantep and Nizip.

The DHA news agency said a passenger bus rammed an ambulance, a fire truck and a vehicle carrying journalists at the site of a previous crash.

Three paramedics, three firefighters and two journalists from the Turkish news agency Ilhas were among the victims, local media reported.

Photos on DHA showed the rear of the ambulance torn off and damage to the bus.

Constables are currently interviewing the bus driver in an attempt to establish what happened, the DHA reported.

Video capture from AFP TV footage on August 20, 2022 shows a bus after an accident with an ambulance on the road between the provincial capital Gaziantep and Nizip. (Demiroren News Agency (DHA) / AFP)

Prosecutors are already investigating a second fatal crash hours earlier, 250 kilometers (155 miles) away, which also happened while emergency services were attending to an earlier incident at the site.

On this occasion, at least 19 people were killed and nearly 30 injured after a truck driver rammed pedestrians in Derik in Mardin province, Health Minister Fahrettin Koca wrote on Twitter, updating a previous record of 16.

The accident in Derik, Mardin province, “occurred after the brakes of a truck collapsed, which hit a crowd”, Koca wrote. Twenty-six others were injured, six of them seriously, he added.

Turkish media shared footage of a driver losing control of his truck and then rushing towards nearby vehicles and pedestrians as they tried to flee. 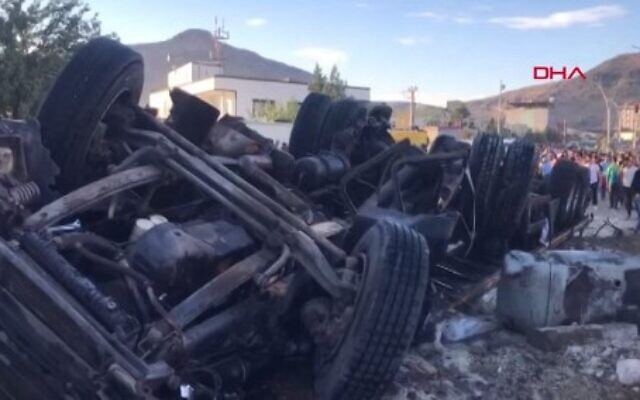 Video capture taken from AFP TV footage on August 20, 2022 shows a truck after an accident in the Derik neighborhood of Mardin. (Demiroren News Agency (DHA) / AFP)

Turkey’s official Anadolu news agency reported that an accident involving three vehicles had occurred at the same site shortly before. Rescuers were already there when the truck slammed into the crowd.

Justice Minister Bekir Bozdag announced on Twitter that prosecutors had opened two investigations into the crashes.

“All resources are mobilized,” he wrote on Twitter, offering his condolences to those who had lost some.

President Recep Tayyip Erdogan dispatched Interior Minister Suleyman Soylu to the scene of the crash and he was expected there later on Saturday, Anadolu Agency reported.

Supporting The Times of Israel is not a transaction for an online service, like subscribing to Netflix. The ToI Community is for people like you who care about a common good: to ensure that balanced and responsible coverage of Israel continues to be freely available to millions of people around the world.

Of course, we’ll remove all ads from your page and you’ll unlock access to great community-only content. But your support gives you something deeper than that: the pride of joining something that really matters.

Join the Times of Israel community Join our community Already a member? Log in to stop seeing this

You are a dedicated reader

We’re really glad you read X Articles from The Times of Israel over the past month.

That’s why we started The Times of Israel ten years ago – to provide discerning readers like you with must-read coverage of Israel and the Jewish world.

So now we have a request. Unlike other media, we don’t have a paywall in place. But since the journalism we do is expensive, we invite readers to whom The Times of Israel has become important to support our work by joining The Times of Israel community.

For just $6 a month, you can help support our quality journalism while benefiting from The Times of Israel WITHOUT ADVERTISINGas well as access Exclusive Content only available to members of the Times of Israel community.

Thanks,
David Horovitz, founding editor of The Times of Israel